All along I had that sinking feeling about the 2016 elections, although my rational side was drawn to sophisticated analytics that put Hillary Clinton’s probability of winning the United States presidency as high as greater than 99%; the Democrats’ chances of gaining control of the Senate looked nearly as good. Well, garbage in, garbage out, as they say. Even if the national polling was acceptable by showing Hillary consistently ahead — she did lead in the popular vote, after all — the state-by-state data was clearly flawed. Donald Trump took most of the battleground states and then some, embarassing pundits who tended to believe that Latinos rather than blue-collar whites were underrepresented in the polls.

So the Democratic candidate has won the popular vote in six of the last seven presidential contests but only won the Electoral College, and hence the election itself, in four of them. The Republicans sure seem lucky. But this at least allows me and like-minded Americans to inform the rest of the world that most of us voted for Clinton. For I can think of few people more dangerously ill-suited to this most-powerful and prestigious office than the Donald. Often ignorant yet never in doubt, boorish, petulant, misogynistic, racist, and, to me, on the wrong side of history on issue after issue, he appears capable of untold mayhem in partnership with the current Republican-controlled U.S. Congress. To hope, against all the evidence, that he with his cohort of mean has-beens and crackpots will betray his wrathful base of supporters and govern as a pragmatic moderate is whistling past the graveyard. I am filled with dread.

When this era is chronicled by historians of the future, I doubt that much of the recent liberal and conservative intellectualizing will survive. If the country was so gripped by anti-establishment sentiment, then why did every conservative establishment Republican senator win reelection? If working-class white males were enraged because they had been the victims of globalization, how come their black and Latino brethren were not? Were Trump’s followers truly convinced that he would “drain the swamp” of corporate corruption in Washington when he never released his tax returns to the public (since he has evidently gamed the system to his own enrichment for years)?  Was Hillary, with all of her achievements and qualifications, such a flawed candidate when so many of the accusations against her were the product of obvious political witch-hunts and easily debunked conspiracy theories? 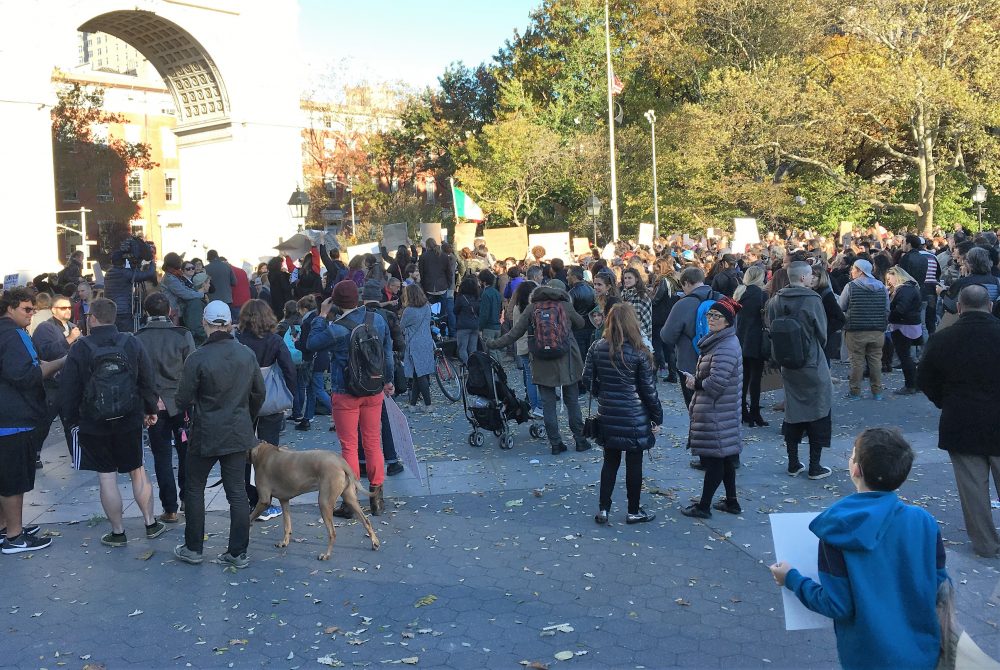 No, I believe that Trump — with his inept campaign and all of his gaffes — would have soundly beaten Bernie Sanders and probably Joe Biden too, because he alone was ruthless in tapping the white resentment that has simmered during Barack Obama’s two terms as president. It is hardly a coincidence that each of this demagogue’s favorite targets has an alien face on it: illegal immigration (Latin-American); terrorism and refugees (Arab and South Asian); free trade (East Asian). On Tuesday, to the motto of “we’re taking our country back,” white, small-town, nativist America got its revenge on multiracial, urban, cosmopolitan America, as the demographic and cultural change personified by our first African-American president found its perfect nemesis. The hopeful enthusiasm that propelled Obama to the White House is vanquished by the spiteful energy of Trumpism. And Hillary seemed to inherit all of the hatred toward Obama but little of the love. Our nation has become increasingly tribal like the South, where the vast majority of whites are Republicans and most minorities are Democrats.

Even more disturbing, perhaps, is that so many mainstream Republican voters, including educated white women, voted for Trump as if he were no different than John McCain and Mitt Romney. Just eight years after the disastrous end to the last Bush administration, how can one not conclude that white people are always willing to give the Republican Party another chance to destroy the country?

I ended my previous piece (“The Twilight of G.O.P. Cynicism?” from May 14) with this: “Only if they get the drubbing at the polls they badly deserve will the Republicans begin to reinvent themselves as a legitimate national party.” A week before the election they appeared to face that reckoning. Now, with their unexpected control of the executive and both legislative branches of the federal government, they have learned that pandering to the basest sentiments of the white electorate is a reliable path to victory. White-male dominance of the U.S. is assured for the foreseeable future, probably with terrible consequences.