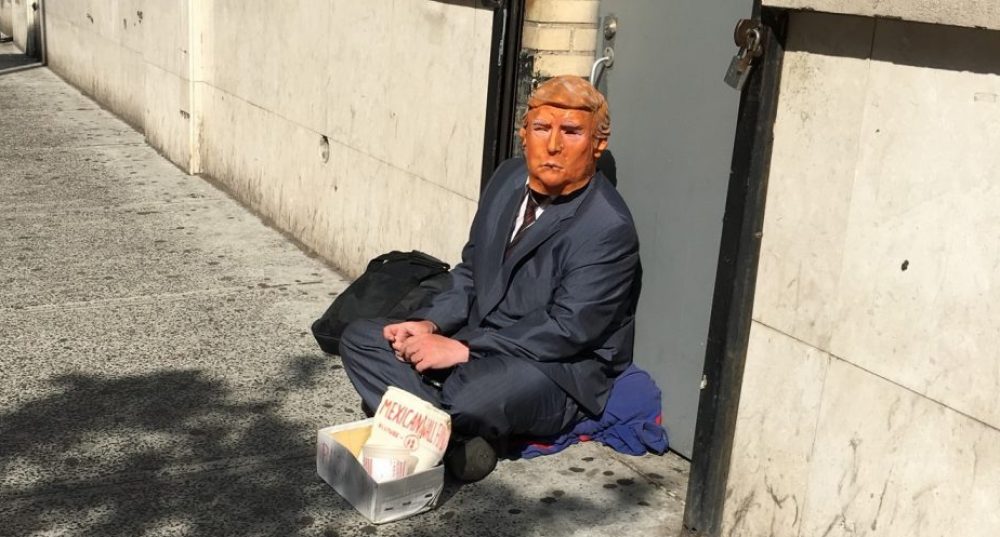 Donald Trump When He Was Down and Out

About two years have passed since my last post, and I’ve got much updating to do. Remarkable trips (several that featured skiing) to Eastern, Central and Western Europe, the North American West, Central America and especially India come foremost to mind. All of this travel was interrupted for a period by radiation and hormone treatment for prostate cancer, which I remain somewhat reticent about.

But shame on me for using that as an excuse to lie low and, among my other sins of omission, neglecting to report on the demise of Health Republic of New York, the insurance co-operative I highlighted in May 2014 while praising the Affordable Care Act (a.k.a. Obamacare). Federal and state regulators closed H.R.N.Y. down in late 2015 as swelling financial losses pointed to near-certain insolvency. In my good fortune, I was able to enroll more or less seamlessly in a comparable plan from Oscar last December.

One must wonder if the authorities really expected such start-up healthcare insurers to be anything but unprofitable for a long time. Whatever the case, hope of sustaining the troubled co-ops wilted quickly in an era when congressional Republicans have voted over and over again to eviscerate or even repeal Obamacare. While they appear to loathe the president’s signature legislation as much as Captain Ahab hated Moby Dick, most galling of all is their total failure to propose a viable alternative.

Yet this is just one instance of what I can only describe as vile political cynicism, which I believe has disgusted Americans across the political spectrum. Some other noteworthy examples include:

Allegedly responsible budget proposals pairing massive entitlement cuts with large hikes in military expenditures, crowned by tax reductions for the richest people and entities — which by most historical evidence would produce ever-greater deficits (along with more social despair);

Feeble denials of climate change, despite mounting proof, with statements ranging from the evasive (“I’m not a scientist”) to the ludicrous (humans cannot be responsible because “God’s still up there”);

Voter-identification laws billed as fraud prevention that disproportionately impact minorities and others liable to support Democratic candidates, when documented cases of voter fraud are quite scarce and voter turnout is shamefully poor.

I could go on and on with other illustrations, but the last one strikes me as uniquely obnoxious because of the decades of painful sacrifices made to secure voting rights for African Americans down South and elsewhere. It also undermines our moral authority to criticize the sham regimes of Russian president Vladimir Putin, Ayatollah Khamenei of Iran, and other antagonists on the world stage.

Escalating Republican extremism and hypocrisy have turned me into a Democrat by default, one who couldn’t bring himself to back a G.O.P. candidate under almost any circumstances. It might come as a surprise to those who know me, but I have never considered myself a political person except in an abstract sense. Sure, I believe in liberal democracy because it seems a relatively benign ideology, less apt to promote misery than the rest. Capitalism, to the extent that it’s managed well enough to unleash human potential without too much degradation of nature and society, is fine by me.

Before emigrating from Canada in 1979 (to attend graduate school in California at the age of 22), I had never voted in a state-sanctioned election. Only after I became naturalized as a United States citizen more than 20 years later did I join the electorate here. My memories of specific political events during that period are vague, although I recall leaning toward a second presidential term for George (H.W.) Bush against Bill Clinton in 1992. But Bush 41’s nomination of the right-wing Clarence Thomas to replace Thurgood Marshall on the U.S. Supreme Court always rubbed me the wrong way; in hindsight, it warned of greater perfidy to come. 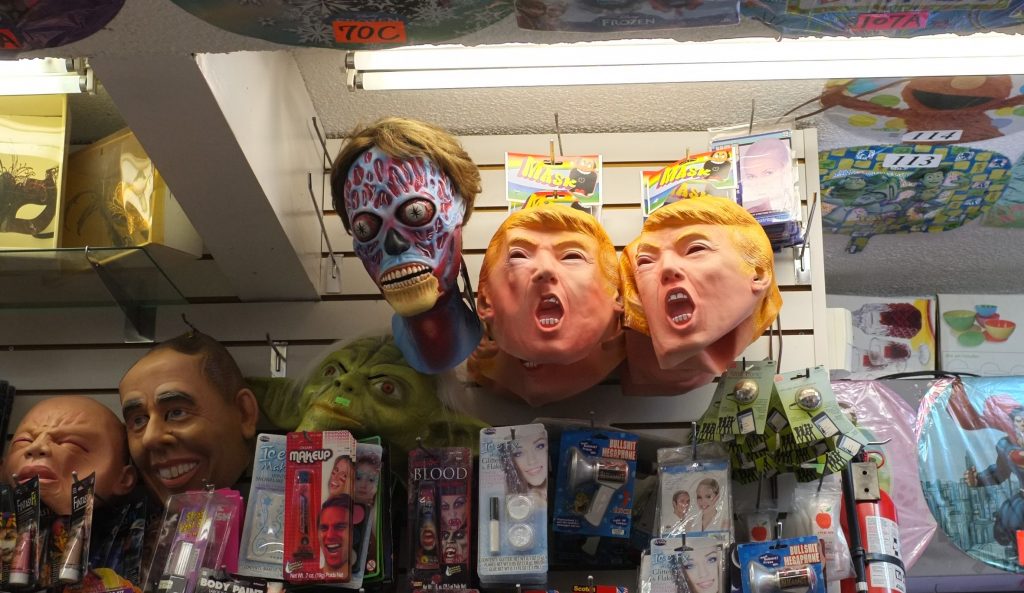 Today we find ourselves in the midst of an election season unlike any other I have ever seen. Donald Trump, a vain, outspoken populist (more than a few would say offensive, racist and sexist) billionaire with no governing experience and disjointed policy stances has upended the party elite and now reigns as the presumed Republican presidential nominee. His likely opponent is Hillary Clinton, a moderate Democrat who has served as a U.S. secretary of state and senator from New York (not to mention first lady), with all the accumulated baggage and enmity such a long, prominent career might bring.

If Hillary was ever the inevitable candidate, the Donald was anything but. Lately, friends and relatives from other countries have taken to asking me how this could happen, including what pundits depict as a “civil war” within and an “unraveling” or “rupture” of the Republican Party.

The particular narrative I’ve embraced goes back to the great political realignment that began with the passage of the Civil Rights and Voting Rights Acts in the mid-1960s under Democratic president Lyndon Johnson. Richard Nixon’s opportunistic “Southern Strategy” then promoted the defection of segregationists to the Republican side, and gradually evolved into a national scheme to foster and exploit resentment in the white masses toward so-called liberal culture, racial- and ethnic-minority dependence on government aid, and so on. From the perspective of spending, gun-rights absolutists and evangelical Christians who oppose reproductive freedom and gay equality (to name a few groups) are pretty cheap to please.

But in the process the Republicans alienated most blacks and latinos, having also fashioned a voting bloc that turned out to be an awkward fit with their traditional patrons: big business and the wealthy, largely averse to regulation and taxation. Hence, the Democrats were left with a less-affluent but fairly stable and demographically sound coalition of minorities and progressive (often urban) whites.

The first major eruption of the Republican base in this period came with the rise of the Tea Party, which followed the bailout of our financial sector at the end of George (W.) Bush’s presidency and the start of Barack Obama’s. The movement’s implied position, that banks should neither be regulated nor rescued when they failed, sounds like a recipe for economic disaster. Nevertheless, the Tea Partiers’ rage was clearly leveled at self-proclaimed conservatives who blinked instead of letting destructive market forces do their work. They also had a problem with immigration, and a telltale fetish regarding the facts of President Obama’s birth and the legitimacy of his election.

While mainstream Republican chiefs were often tormented — If not ousted — by these rebels, together they enjoyed the electoral successes powered by a wrathful rank and file, particularly in the mid-term congressional balloting of 2010 and 2014. They also gained dominance of our state governments, despite losing the popular vote in five of the last six presidential contests, and barely paying lip service to easing the distress of countless loyal supporters. What good has supply-side “Reaganomics” done the middle class since the 1980s?

There is a debate as to whether the blue-collar white males at the core of this upheaval have turned increasingly nativist because their economic stature has suffered under globalization, or rather as a bigoted reaction to the rising prominence of minorities, symbolized by the president himself. Let’s not ignore the terrorist attacks of September 11, 2001, either, and those since. I suspect the answer is a combination of the above. Regardless, the G.O.P. these days is for all practical purposes anti-immigration.

This development is only one of the concessions the party leadership has made to placate its restive base. According to horror-genre lore, the vampire cannot enter your house unless he’s invited in. Well, by indulging “birthers” and others of that ilk, the Republicans opened the front door to Donald Trump. Yet even as they were wringing their hands over his primary victories, G.O.P. senators resolved to deny the eminently qualified Merrick Garland a vote to fill the Supreme Court seat of the late Antonin Scalia. Few would deny that the Obama administration has faced an unprecedented level of obstructionism.

The angry followers of Candidate Trump respond to Republican cynicism differently than I do. They probably don’t mind tax cuts for the affluent, or care much about global warming, the rights of non-heterosexuals or voter disenfranchisement. On the other hand, after decades of growth during which the lion’s share of the benefits went to those atop the economic ladder, I doubt they rejoice when the likes of House Speaker Paul Ryan urge privatizing social security and “voucherizing” Medicare. Trump, however, electrifies them with promises to construct a wall along our border with Mexico, prevent Muslims from entering the country, and put an end to unfair competition from China. With the run of establishment favorite Jeb Bush going down in flames after the South Carolina primary, the future of Republicans talking tough yet endorsing the latest trade agreement anyway is very uncertain.

The hyper-ambitious Ted Cruz, Trump’s closest rival, cultivated an outsider persona but appeared to me as simply the most radical version of the recent Republican style, the cynicism included. Even though Cruz primarily attracted the religious right in its crusade against the courts’ legalization of gay marriage, he nearly matched Trump in his zeal for deporting illegal immigrants and checking the Muslim menace. But when the brainy Cruz spouted disingenuous nonsense, like vowing to help small business by closing the federal Environment Protection Agency (more probably a pitch for campaign funds from the Koch Brothers), Trump’s ill-informed falsehoods rang honest by comparison. 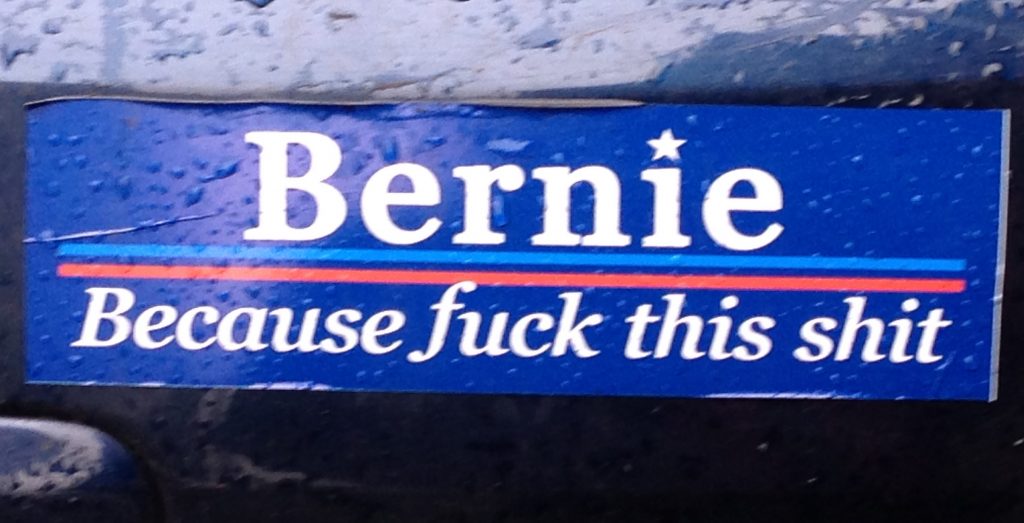 Anger on the Left: My Favorite Bumper Sticker of the Election

(Bernie Sanders, I think, represents a more-legitimate if narrow channeling of national anger at evils such as growing income inequality, plus the threat to our society posed by fossil fuels, free trade and an insatiable banking industry. Beyond the electability issue, the proposals offered by this irate 74-year-old Jewish “democratic socialist” often match his Republican counterparts’ in their implausibility.

Having worked as a securities analyst for decades, I can attest that most Wall Street employees are not greedy oligarchs. The $18 trillion U.S. economy requires a large, sophisticated financial sector; in many respects ours is the envy of the world, but it must be regulated appropriately. At times Sanders sounds like he would prefer to demolish it than reform it. Further, recent analyses have revealed that segments of his mostly white constituency detest not just Hillary Clinton but President Obama too, and could well favor Trump come November.)

Lest I give the wrong impression, I would consider Donald Trump in the White House a grave peril to our country and the world — yet it’s difficult for me to fathom the American public rewarding a mountebank like him with the nation’s highest office. Still, we ought to be grateful that he exposed both the G.O.P. establishment’s cynicism and the bigoted extremism of the party base it cultivated, making it tough to backtrack.

There’s no doubt that additional power- and job-hungry politicos will jump on the Trump bandwagon, even after disparaging him repeatedly on the public record. But only if they get the drubbing at the polls they badly deserve will the Republicans begin to reinvent themselves as a legitimate national party.