They’ve got a wall in China

To keep out the foreigners they made it strong

I’ve got a wall around me

You can’t even see

It took a little time

To get to me 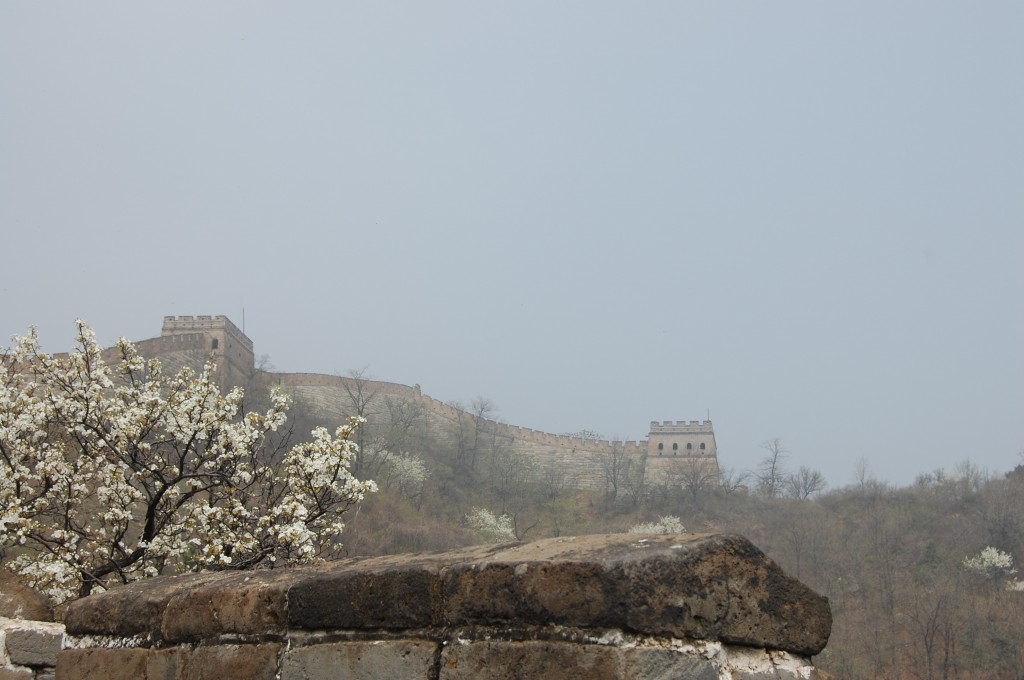 The Great Wall at Mutianyu

WHEN I STARTED THIS BLOG I made an unstated commitment to post when moved to do so, instead of on a regularly scheduled basis.  On the other hand, delving into the personal was one of the last things I intended.  Yet here I am, baring my soul about a recent trip to China while it’s still alive in my aging memory.

The opportunity to tour China arose because of the invitation of Susie, my high-school sweetheart and a good friend for most of the four and a half decades since we met in fifth grade.  Susie’s base is Montreal but, as an executive with a global corporation, she and her family have lived abroad, in places as distant as South Africa and Poland.  After her husband Daniel fell to cancer several years ago, she did a stint in my adopted home town of New York; her two children, Emily and Max, now adults and on their own, she’s currently stationed in Shanghai.  At her urging (and with a timely break in the parade of earnings announcements vital to my work as a securities analyst), I planned a 10-day visit that also took me to the historic cities of Suzhou, Xi’an and Beijing.

Susie was a most gracious host, showing me the delights of China’s booming commercial metropolis: the dignified architecture of the Bund; Pudong’s pyrotechnical skyline across the Huangpu River; the French Concession, with its time-worn colonial residences where clothes hang outside to dry; the parks where groups of locals engage in singing and ballroom dancing, even matchmaking, all in public view.  Shanghai is a great dining city too, and we enjoyed both Eastern and Western meals.  There and on the journey ahead I would partake of juicy dumplings, lamb soup and Beijing duck, marveling from a safe distance at such novelties as roasted scorpion on a stick.

On my own I covered every exhibit in the first-class Shanghai Museum, housing superb collections of ancient Chinese bronze and ceramic works, hanging painted scrolls and calligraphy.  One day I rode the bullet train to and back from nearby Suzhou, once home to the country’s greatest clockmakers and now reputedly the world’s largest manufacturing site of digital cameras and laptop computers.  There, surrounded by industrial sprawl, remain some of China’s finest classical gardens, with poetic names like “Garden of the Master of the Nets” and “Humble Administrator’s Garden.” 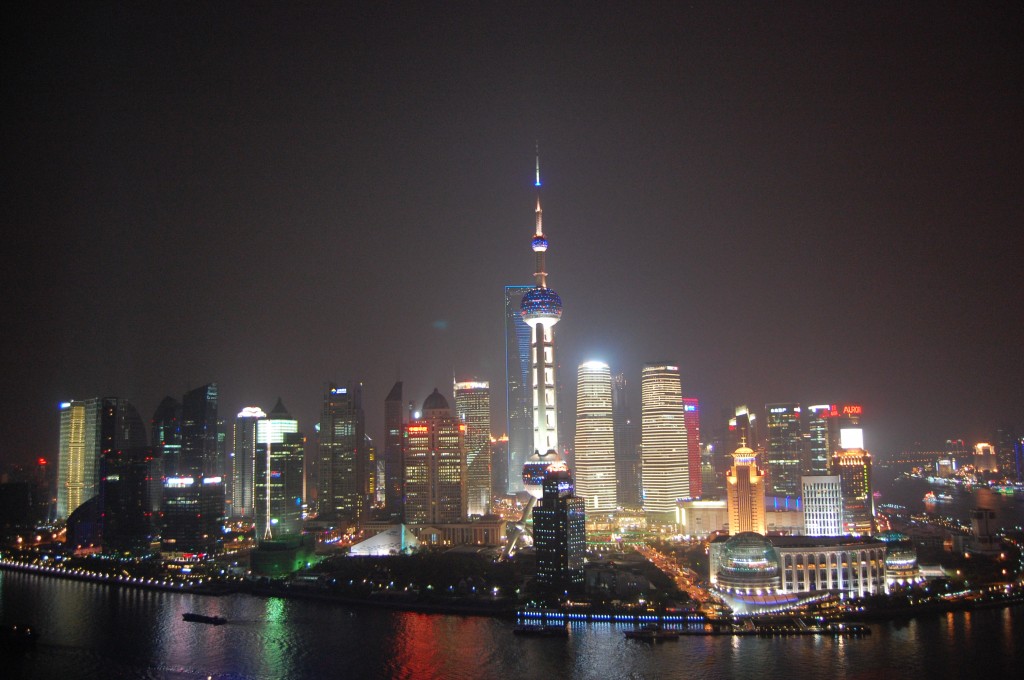 As Susie well knew, Shanghai is an ideal introduction to China for the novice, a place to get accustomed to its ways and recover from jet lag.  To facilitate my journey onward she provided maps and papers with the addresses of hotels and restaurants written in English and Mandarin for the taxis, booked drivers to take me to outlying sites, even loaned me a China Mobile phone with a lifeline to her bilingual assistant Connie.  I couldn’t have been more fortunate.  Only five days remained, and I had a lot of ground to cover to see as many of the glories of this ancient land as possible.

THE APRIL WEATHER was excellent for traveling: warm temperatures during the day and cool at night, with practically no rain during my entire stay.  The semi-opaque air was another story entirely.  According to different accounts I heard, it was dust blowing in from the Gobi Desert and fog mixed together, good old-fashioned pollution, or some other combination thereof.  This was tolerable for breathing, worse for photography.

In a China that is both rapidly modernizing and still under firm government control, I was almost unaware of the scandalous details regarding Bo Xilai, the deposed Communist Party chief of Chongqing.  Our Western media have been captivated for weeks by this tale of corruption, wiretapping and notably Bo’s wife, Gu Kailai, portrayed by some as an Asian Lucrezia Borgia for her alleged poisoning of a British businessman.  Still, political censorship in China is nowhere near as absolute as it used to be, and I had no problem staying current on all of the major events in business and sports.

The everyday folk I encountered were never hostile, occasionally curious and friendly, but mostly indifferent to my presence.  I rarely felt unsafe, nor did I even lose anything of value (other than the tube of toothpaste that Beijing airport security confiscated from me before boarding my flight back to the States).  At the major destinations, mobs of Chinese tourists — who tend to spit loudly and often don’t respect another’s physical space — could be oppressive.  Yet I understood that rising affluence has given many a first chance to discover their own country, which the American majority takes for granted.  They’re in a hurry.

A couple of flight delays that I endured were a minor inconvenience, never deterring me from my appointed rounds.  To take in all the sights, sounds and smells without interference, I avoided tour guides, pedicabs and even taxis whenever possible.  I walked until my feet, legs and back ached, along Suzhou’s old canals, in the Muslim souk of Xi’an at one end of the Silk Road, up and down the steep course of the Great Wall at Mutianyu, around the lakes of the Summer Palace and through the picturesque hutongs (alleys) of Beijing. 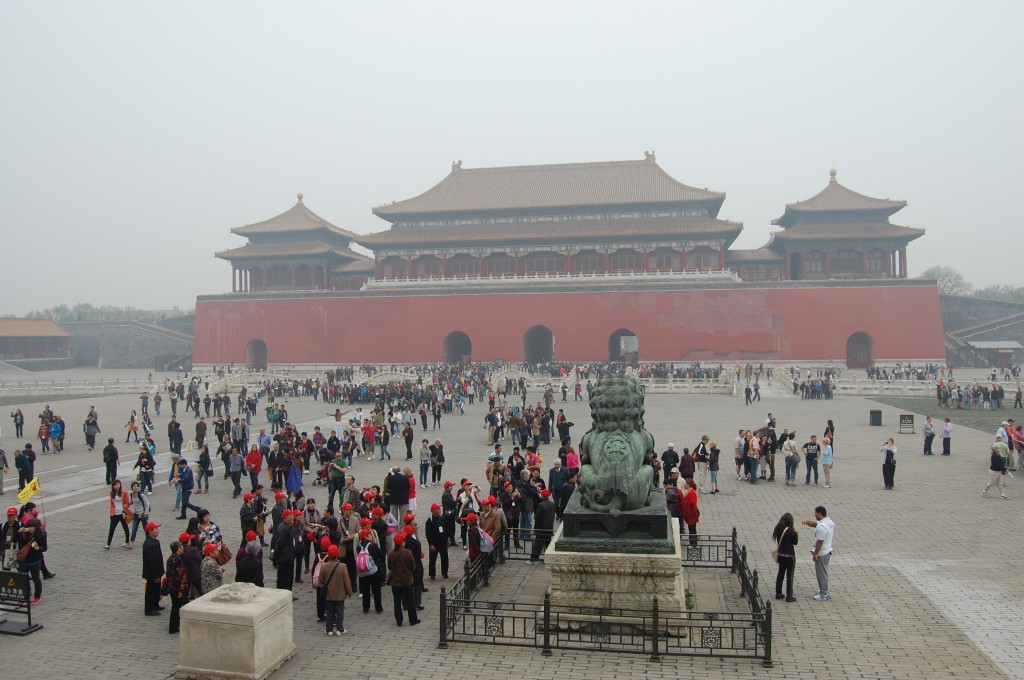 So I hit all of the highlights on my route, and now could cross the China trip off my bucket list.  But I had very little meaningful human contact in the final days, knowing only a handful of Mandarin words in a country where few outside the major hotels speak any English.  Armed with a Nikon and an iPad, I brought home nearly 300 pictures of the trip and don’t have a single one with me in the frame.  And here too, many people went about with earphones plugged into their music players, almost oblivious to anyone whose path they crossed.  I might as well have been one of them.

ON MY LAST DAY of sightseeing, I was fumbling with a pair of maps outside the north gate of Beijing’s Forbidden City, the enormous palace compound for two imperial dynasties, when a woman’s voice asked me from behind where I was from.  Turning around, I told her I was American.  She was of a younger but indeterminate age, with a sweet, sad face that seemed to me more Mongolian than Han Chinese.  Petite and conservatively dressed, she said she was visiting from Harbin, a city in the extreme northeast of China.  There, she told me, I would be one of the few Westerners anybody ever sees, other than the odd Russian.  The woman said she had spent three hours in the Forbidden City; I had spent four.  But I will never know anything more about her, except for what my imagination conjures up. 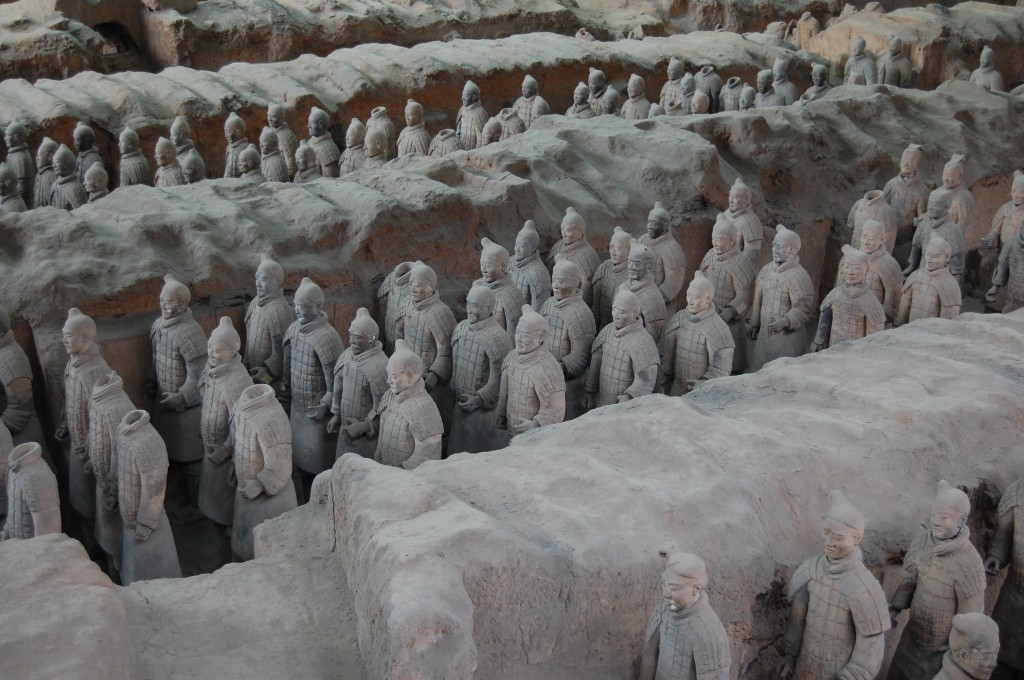 Suddenly, she asked me if I wanted to go for a coffee.  By then I had become inured to girls in touristy areas calling out, “Hello, Mister,” trying to steer me to expensive, supposedly authentic tea ceremonies and the like.  Outside Xi’an — where more than two millennia ago the tyrant Qin Shi Huang ordered the production of a whole terra-cotta army and other figures to guard his mausoleum – a pretty tour guide set me straight when I politely declined her services: “You think you so smart.”  (In hindsight, it would have done me good to explore the site in her company.)

When a 55-year-old man is approached like that by an unfamiliar woman, it’s natural for his guard to go up.  This was out of the question.  She was too aggressive, her English ability suspicious.  I had a lovely wife waiting for me at home.  There was no time.  “Look,” I said, “I’m leaving early tomorrow and I only have a few hours left to see Beijing.  I need to finish my walking tour.  But it was very nice meeting you.”  After shaking her hand I rambled off toward Prince Gong’s residence, which turned out to be a beautifully restored, scaled-down Forbidden City, overwhelmed by tour groups.

By the next morning the woman was beginning to haunt me.

What was she hustling me for: a sugar-daddy night on the town, a Green Card?  Or maybe she was just a more mature version of the schoolgirls on an outing to the Suzhou Museum who asked me, an exotic American, to pose for pictures with them, wanting just to practice English with a native speaker.  She was a human-rights activist trying to recruit me, perhaps, or a government agent posing as one.   Did I really want to find out?  I, who never missed taking a pill the entire trip, tracks his personal net worth in real time, works out at the gym every two days and logs in his activities, pictured myself as a Prufrock, measuring “out my life with coffee spoons.”  I switched from T.S. Eliot to Henrik Ibsen (“When we dead awaken.… We see that we have never lived”) before my cliché alarm sounded. 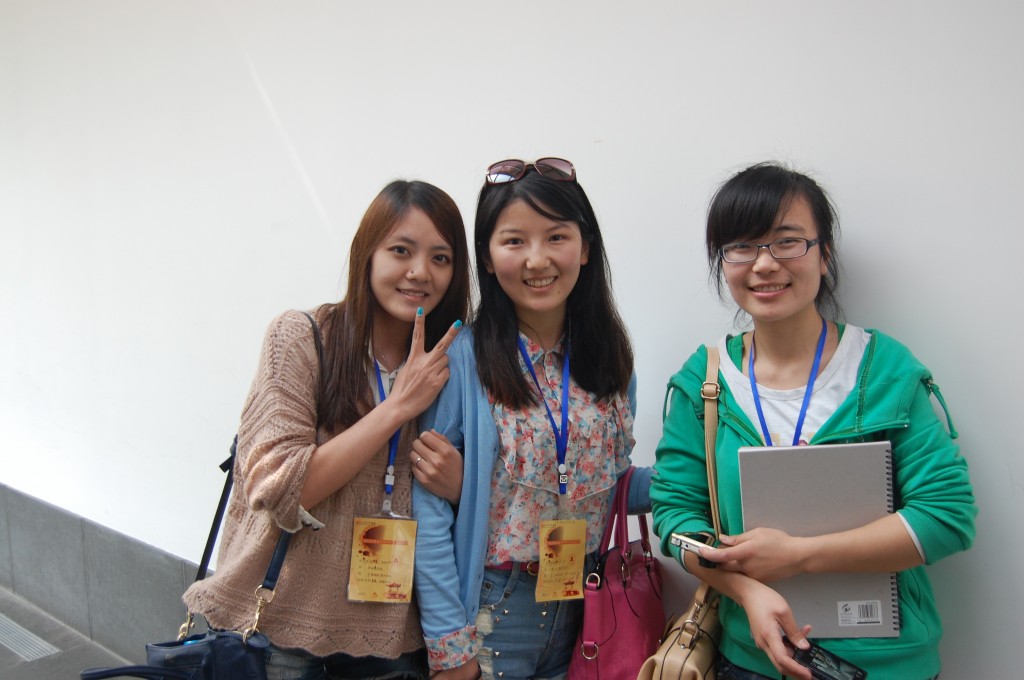 Schoolgirls at the Suzhou Museum

Still, didn’t my drive and self-discipline ultimately afford me the wherewithal and savvy to arrange (with Susie’s invaluable help) such an adventure on short notice?  Haven’t I visited dozens of countries and connected with people all over the world?  Shortly, like Odysseus, I would be returning home to my Ithaca, my Penelope, where all would be right – and that alarm went off again.

On the final flight leg back to New York from San Francisco, I went into the aircraft lavatory and spontaneously cried.  It bewildered me, because I had been so pleased with everything, but for a moment the tears washed away a lifetime of jadedness.  Soon enough she will fade from my recollection; I’m already having trouble visualizing her face.  But the China trip could’ve been perfect.  What would I have risked to spend a half hour with a diminutive stranger who braved rejection to meet me?  Why didn’t I join the woman from Harbin for a cup of coffee?