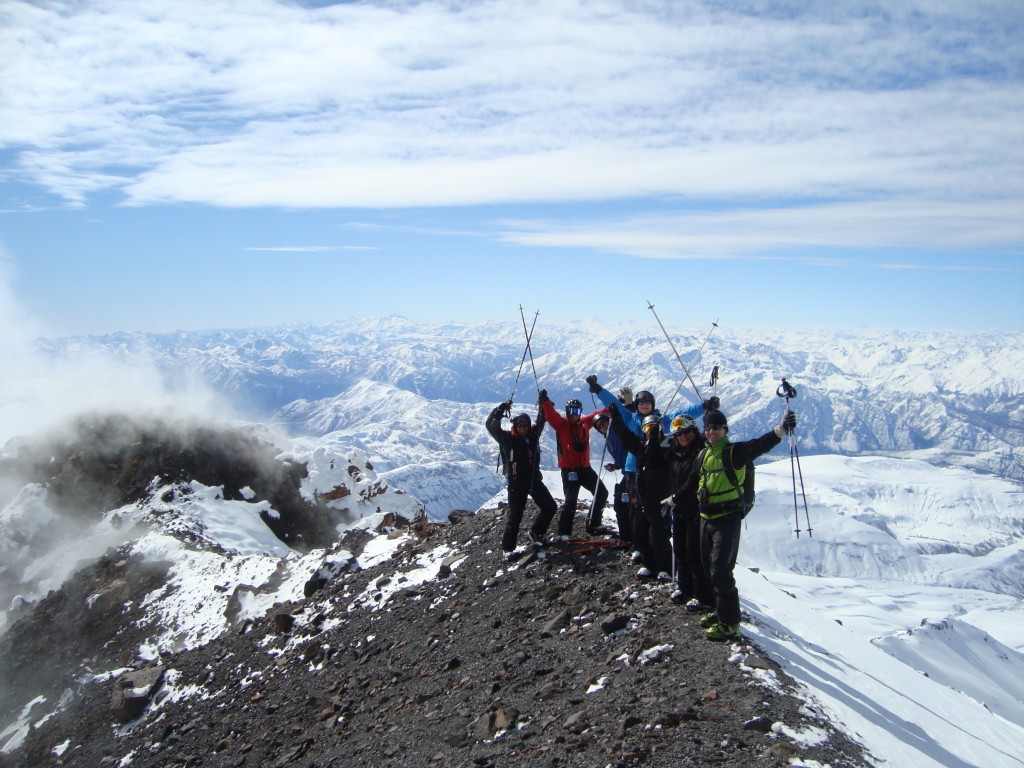 Atop the Chillan Crater

Returning from the South American winter to the heat of New York in late August, I imported a vicious cold, which I can just partly blame for the delay in publishing this post.  My other excuses include a large backlog of work and personal duties, a small kitchen flood and other domestic irritants, time-consuming photo editing, and general procrastination.  Still, the 11 days I spent traveling around Chile and skiing in the backcountry of the world’s highest mountain range outside of Asia were the experience of a lifetime that I won’t ever forget.

Day One  I arrived early in the morning, stored most of my luggage at the airport, and took the local bus to downtown Santiago.  Founded by the conquistador Pedro de Valdivia in 1541, this metropolis of more than five million inhabitants lacks the colonial charm of Quito.  Yet, unlike the lofty Ecuadorean capital up north, Santiago occupies a basin near sea level, separated from the Pacific Ocean by a coastal range of mountains and treated to views of the snow-capped Andes that would awe even the proud residents of Salt Lake City, Calgary and Denver.  Its roads and other infrastructure are fine by regional standards, although the city could stand more urban planning and some California-style emission controls.  (The Mediterranean climate and seismic risk reminded me of the San Francisco Bay area.) 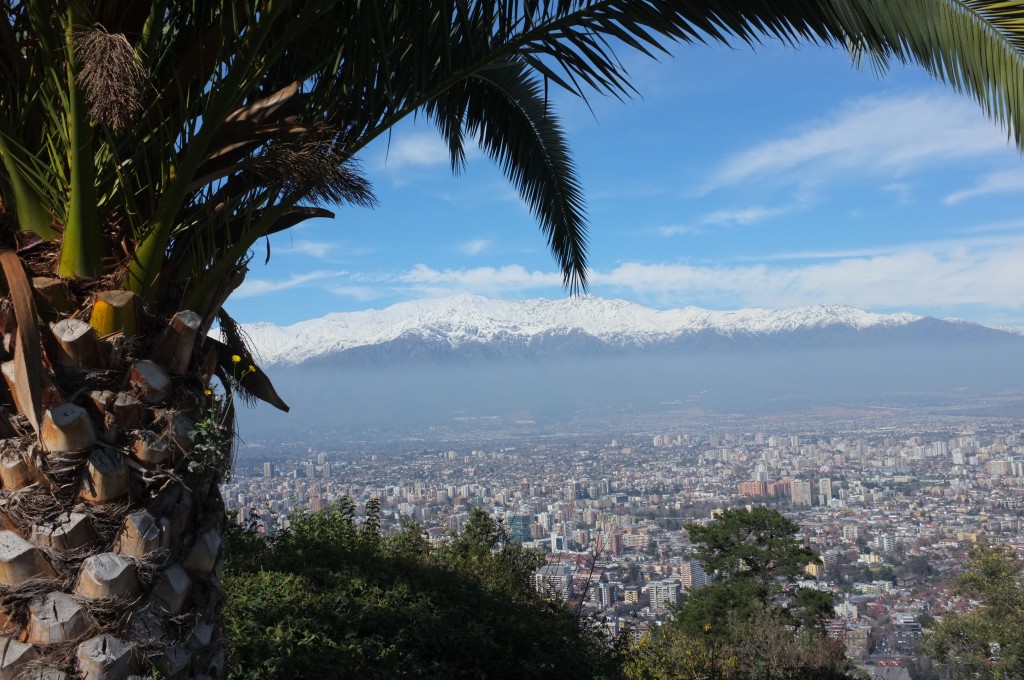 Santiago and the Andes

Political graffiti on run-down buildings in central Santiago invoked deposed socialist president Salvador Allende, while the fascistic uniforms of the Carabineros were reminiscent of dictator Augusto Pinochet.  But Chilean politics were not on my agenda, so I toured the historic Plaza de Armas, peeked into the grand Catedral Metropolitana, and boarded the hop-on-hop-off bus for a spin around the urban sprawl.  The malls and tony neighborhoods we passed held scant interest for me, and I had precious little time for museums (except the one specializing in pre-Columbian art, which was damaged in the earthquake of 2010 and shut when I tried to visit).  But a sweaty, muddy hike up to the Virgin Mary statue atop the Parque Metropolitano rewarded me with spectacular vistas of the city.  Exhausted, I retraced my route back to the airport, where I reclaimed my bags and checked into the ultra-convenient Holiday Inn.

Days Two to Four  The resort town of Farellones is less than 25 miles from Santiago, but because of the narrow switchback road the trip took more than an hour for our group of seven skiers, two guides and driver, hauling a trailer full of ski equipment and other baggage.  We still had most of the afternoon left to warm up on our skis in the flat light of Valle Nevado and undergo the necessary avalanche training.  Lucky for us, a recent storm had salvaged a hitherto woeful season – seemingly a continuation of what we suffered in much of the United States last winter — covering enough rocks for enjoyable skiing.

With elevations and vertical drops similar to large resorts in the northern hemisphere, Valle Nevado, El Colorado and La Parva featured wide-open European alpine slopes (that is, above the tree line but sans glaciers) and the heavy snow associated with North America’s  Pacific coast.  My comparatively narrow all-mountain K2s and aching lower back would soon be put to the test, I feared correctly.  Aside from the sluggish fixed-grip chairlifts that looked like hand-me-downs, we would depend on T-bars and Pomas. 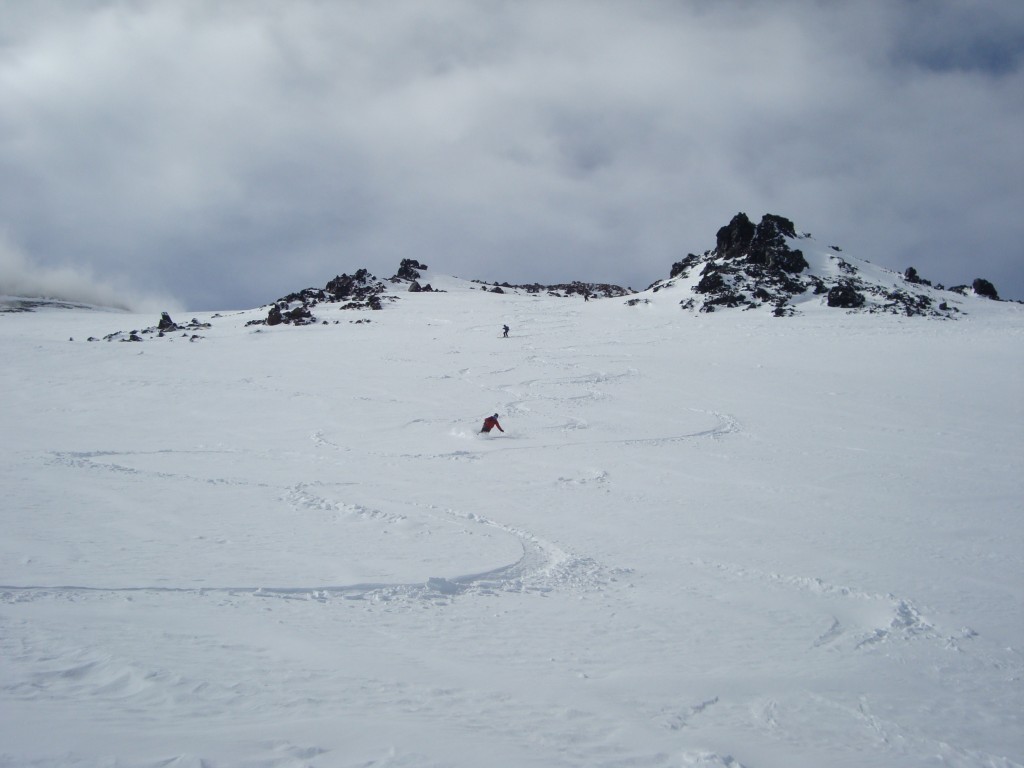 At El Colorado the next day, however, we made use of another conveyance: our Mercedes-Benz van.  Beneath sunny skies, our lead guide Mo shepherded us under the rope and outside the ski area proper to some of the most wonderful terrain I’ve ever descended.  Snow conditions were highly variable, ranging from dense powder to crud and crust, as we worked our way down to the paved road.  There, our driver Fernando waited to shuttle us back to the base lifts.  The highlight of the following day at La Parva was a steep ascent to ski some chutes and look for powder at higher elevations, made even more challenging by the need for most of us to carry backpacks laden with skis and avalanche equipment.

Day Five  We spent the prior night at a 19th-century hacienda turned hotel in Los Andes, about 50 miles north of Santiago on the main route to Argentina.  The good news: another storm was tracking toward the mountains.  The bad news: the road to Portillo was closed due to snow and wind.  Instead of skiing at the legendary Chilean station, we went horseback riding at a mountainous local vineyard, viewing ancient native petroglyphs along the way.  And ate a hearty traditional country lunch.

Chile’s cuisine favors meat, although the country’s long coastline provides ample seafood for ceviche (a Peruvian import) and other dishes that I prefer.  The churrasco, grilled beef on a bun, is a guilty delight with or without cheese; my order tended to feature chicken, plus tomato and avocado.  Their fruits and vegetables grace North American tables during the winter, but the Chileans don’t appear to bring in our summer produce.  The local carmeneres and cabernet sauvignons are good all year round to wash down the most filling of foods.  We ate all of our meals as a group, including the sole “pescatarian,” and drank plenty together.  The pisco sour (another gift from Peru) was our cocktail of choice. 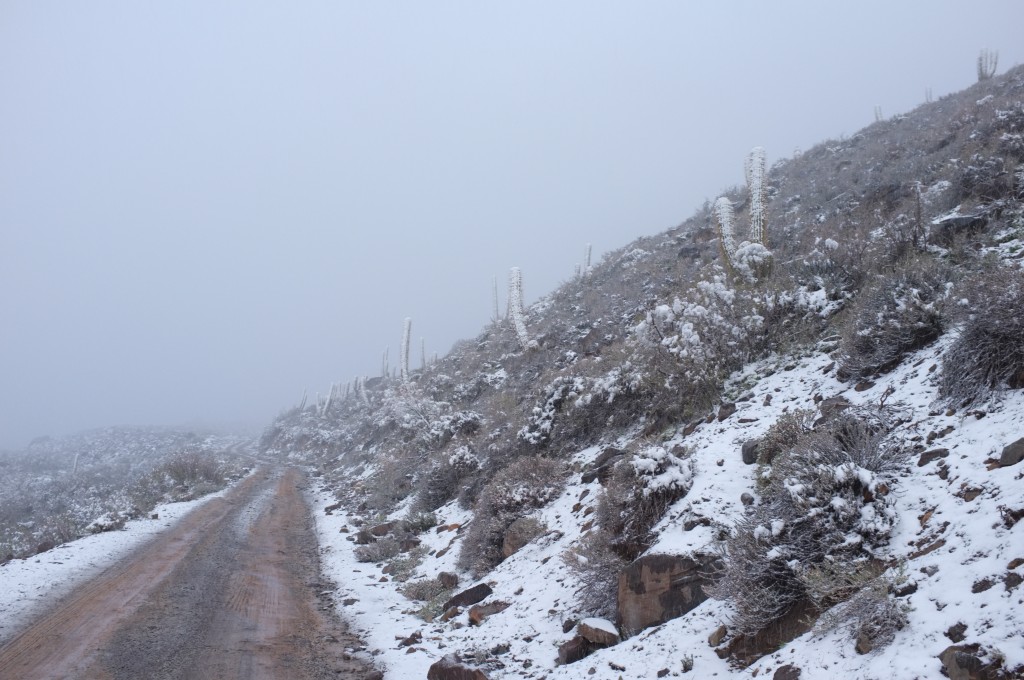 The Road to Arpa

Day Six  Arpa cat-skiing more than compensated for our Portillo disappointment.  The trip of scarcely more than 20 miles by four-wheel-drive vehicles brought us through an otherworldly landscape of cacti coated in fresh snow, followed by a white-knuckle climb of hairpin turns to the Arpa lodge at an altitude of almost 9,000 feet.  With Aconcagua – whose summit elevation of close to 23,000 feet makes it the Americas’ tallest peak – in the background, we combed the all-natural snow on five cat runs (with most of us opting to pay extra for the fifth).

Days Seven to Nine  The trip from Los Andes to Chillan, more than 200 miles south of Santiago, took all day.  In a country nearly 2,700 miles long, we traveled less than half the way to Patagonia.  The deeply rutted side road to our hotel hadn’t been cleared of the latest snowfall, forcing our driver to hook up chains on the drive wheels.  But the minor ordeal was well worth it.  Although significantly lower in top altitude than its Farellones siblings, Nevados de Chillan boasted contoured lift-serviced terrain, smoking fumaroles and treed runs at lower elevations.  I dare say that, under proper ownership, it could be one of the great ski resorts of the world.  A local shop even repaired my rock-damaged bases overnight at a very reasonable cost. 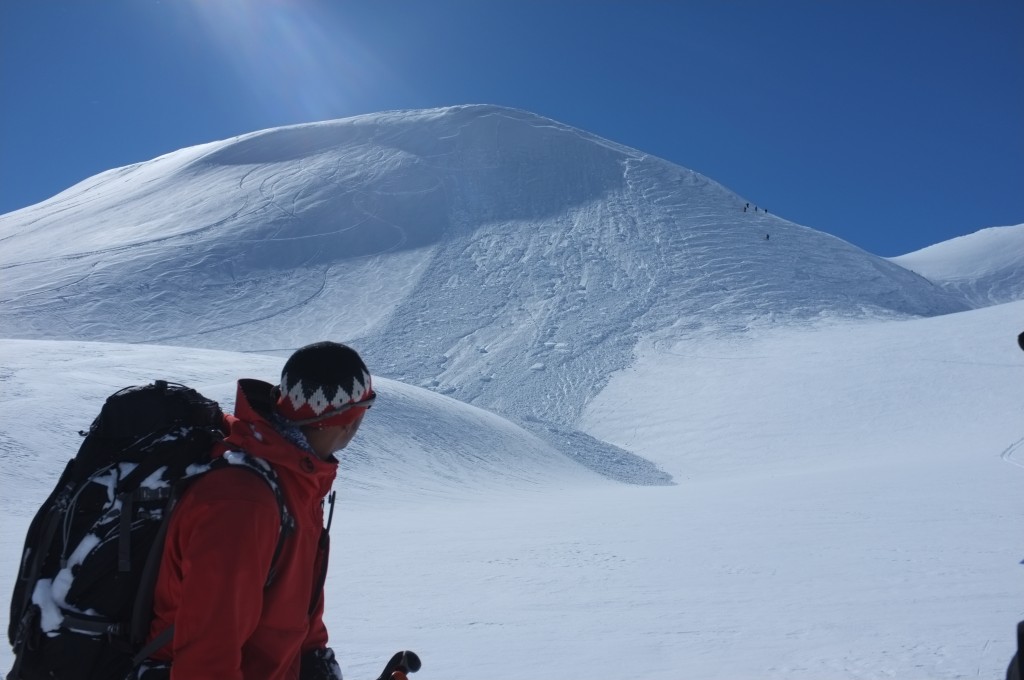 In the morning, we rode the old, slow lifts and explored the groomed and off-trail acreage under a warm sun.  Then we hired a snow cat to ferry us up the side of one of Volcan Chillan’s two active cones, where we hiked up to the rim.  This, and the descent of more than 5,000 feet that followed, must rank as the highlight of the trip.  We posed for a photo on the edge of the crater, volcanic fumes and Andean peaks as our backdrop.  On the way down through out-of-bounds land, Mo triggered an avalanche on one of the steeper pitches but managed to ride it out.  With some trepidation, we detoured around the slide debris and carried on safely to the base.

Our last day of skiing was slightly more mellow yet still involved a remarkable out-of-bounds circuit that I pushed myself to do twice, despite the chills and aches of a nascent viral infection.  Nearing 56 years of age, would I ever ski here again?

Day Ten  The group of seven skiers, all but one native to North America, ranged somewhat in age (from 36 to 60 years old), physical fitness, and technical ability.  With a little patience on our part, this caused no problems on the mountain that the guides couldn’t manage.  Yet the sole female in the group had taken a disliking to me, and fortunately waited until the voyage back to Santiago airport before erupting.  After stopping to visit the colorful Chillan market, we traded barbs at lunch.  She proceeded with a full-blown lambasting, calling me “skinny,” an “ugly American,” and wishing colon cancer on me.  Well, at least I don’t have to worry about her and her husband looking me up on their next trip to New York.  Needless to say, the van’s cabin was quiet until we reached our destination and (selectively) bid our farewells. 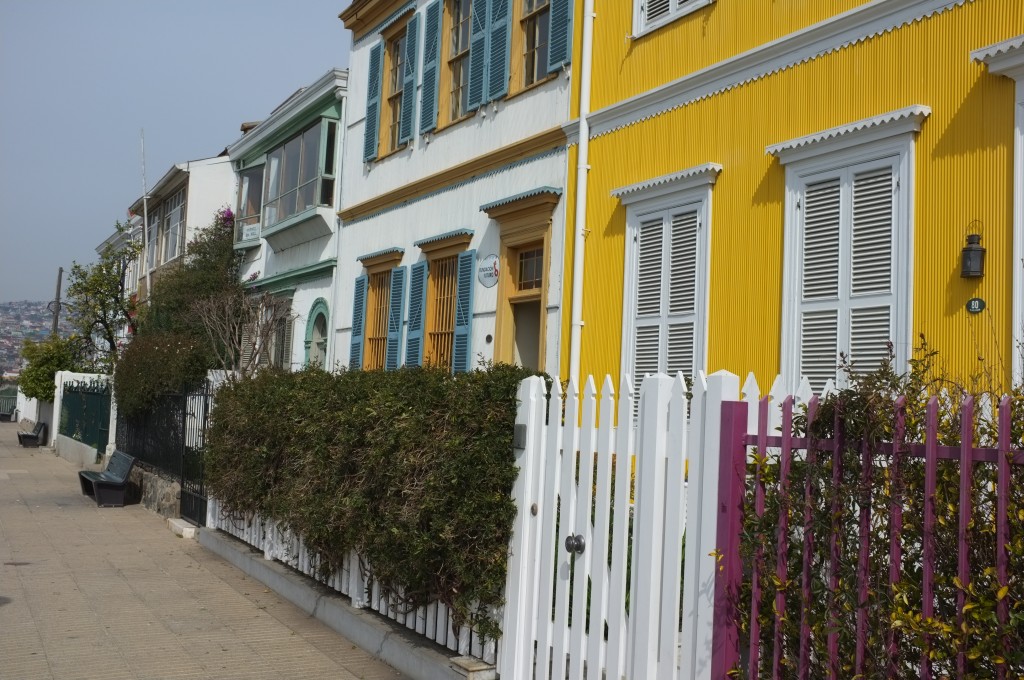 Day Eleven  Having stored my ski equipment at the airport the night before, I was picked up at my hotel by a local guide for an excursion through the Casablanca wine country to the Pacific coast.  After I visited Pablo Neruda’s fascinating homestead at Isla Negra, we talked about his friendship with Federico Garcia Lorca, of the Chilean Roberto Bolano and other South American literary greats, en route to Valparaiso.  The colorful, hilly neighborhoods of this port city, whose decline began with the 1914 completion of the Panama Canal, make it one of the nation’s cultural treasures.  Tear gas was in the air from the student and worker riots that day, so we left for the more bourgeois pleasures of nearby Vina del Mar, with its casino and luxury residences.  Depleted physically and otherwise, I was quite ready to board the aircraft for my long overnight flight back to summer.